Unlocking the untapped potential of light in optical communications — ScienceDaily 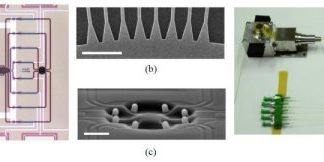 Scientists at Tokyo Institute of Technology have fabricated a multiplexer/demultiplexer module based on a property of light that was not being exploited in communications systems: the optical vortex. Such devices will be crucial for improving optical networks, which are the backbone of today’s Internet, so that they can meet the traffic demands of tomorrow.

In our communication-centered era, Internet traffic has been increasing rapidly. The massive amounts of data that travel through the Internet are enabled by huge backbone networks, usually involving millions of connections deployed using optical communication technology. Foreseeing that this increase in data flow will not stop anytime soon, researchers worldwide are searching for ways to further develop and improve optical communications.

One ubiquitous technique in modern electronic communications is multiplexing, which is a way to maximize the use of the available bandwidth. Multiplexing consists in packing multiple signals into a single signal that can be sent through a shared medium, such as an optical fiber. The received complex signal is then demultiplexed at the receiver and each simple signal is routed to its intended destination. Multiple multiplexing approaches are used nowadays to achieve speeds of over 100 gbits/s through optical networks.

However, we need to find a way to cram more data into optical signals without requiring more energy and at a low cost; that is, new multiplexing technologies are needed. Recent promising methods involve taking advantage of properties of light not conventionally used for communication to encode independent signals. For example, the polarization of light has already been employed and practical applications have been proposed.

On the other hand, there is another characteristic of light, called the “optical vortex,” that can be exploited. This was the focus of a research carried out at Tokyo Institute of Technology, led by Assistant Professor Tomohiro Amemiya. “The optical vortex carries the orbital angular momentum of light and can be used to multiplex signals by assigning each signal to a light wave of different momentum,” explains Amemiya. The application of the optical vortex for signal multiplexing represents untapped territory with great potential.

Of course, to even think of encoding signals into light waves with different optical vortexes and transmit them, it is first necessary to design and implement the necessary circuitry for both the multiplexing and demultiplexing operations. The research team therefore designed and fabricated an orbital angular momentum multiplexing/demultiplexing module.

Their device was fabricated so as to take five independent signals as input. Using a combination of two tiny circuit structures, called a star coupler and an optical-vortex generator, each of the five signals is “encoded” with a unique optical angular momentum. The output signal consists of a combination of the five signals, and the receiver circuit only has to carry out the multiplexing operation in reverse (demultiplexing) to end up again with the five independent signals.

Devices and multiplexing techniques such as the ones demonstrated by the team will be crucial in the very near future. “It is certain that the demand for high capacity systems with low cost and less energy losses will further increase in the future,” states Amemiya. Fortunately, more ways to improve current communications systems by exploiting the untapped properties of light will surely become available to bring us one step forward in our communication era.

Materials provided by Tokyo Institute of Technology. Note: Content may be edited for style and length.