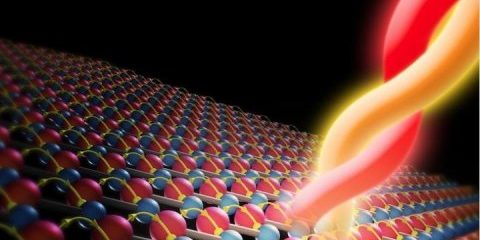 A recently discovered Weyl semimetal delivers the largest intrinsic conversion of light to electricity of any material, an international team lead by a group of Boston College researchers reports today in the journal Nature Materials.

The discovery is based on a unique aspect of the material where electrons can be separated by their chirality, or handedness — similar to DNA. The findings may offer a new route to efficient generation of electricity from light, as well as for thermal or chemical sensing.

“We discovered that the Weyl semimetal Tantalum Arsenide, has a colossal bulk photovoltaic effect — an intrinsic, or non-linear, generation of current from light more than ten times larger than ever previously achieved,” said Boston College Associate Professor of Physics Kenneth Burch, a lead author of the article, titled “Colossal mid-infrared bulk photovoltaic effect in a type-I Weyl semimetal.”

“Furthermore this is in the mid-infrared regime, which means this material can also be used for chemical or thermal sensing, as well as waste heat recovery,” Burch added.

Typically, light is converted to electricity by creating a built-in electric field in a semiconductor, Burch said. “This is achieved through chemical modulation, and results in a fundamental upper limit to the potential efficiency — known as the Shockley-Queisser limit.”

The alternative approach taken by the team explored exploiting the handedness of the electrons in the material to intrinsically generate direct current through the nonlinear mixing of the waves of light, Burch said.

This approach has typically been too small to be useful. But researchers recently realized it is closely connected to the topological properties of the electrons. That prompted predictions that the unique, DNA-like behavior of electrons in Weyl semimetals could produce enormous nonlinear effects.

“We focused on answering whether Weyl semimetals live up to the predictions of large, intrinsic nonlinear responses to generate current,” said Burch, co-author of the paper with Philip Moll of Ecole Polytechnique Federale de Lausanne, and Ni Ni of UCLA.

He added that the team was surprised at the magnitude of the electronic effect, which was provoked by a new fabrication approach.

“The size of the effect was far larger than we dreamed,” said Burch. “A previous group from MIT found their response was dominated by thermal, or extrinsic, terms, our use of the focused ion beam fabricated devices and symmetry allowed us to uncover the colossal bulk photovoltaic effect at room temperature.”

Burch said the team is working to determine the “sweet spot” for the effect, specifically what is the ideal device configuration and wavelength of light.

Materials provided by Boston College. Note: Content may be edited for style and length.