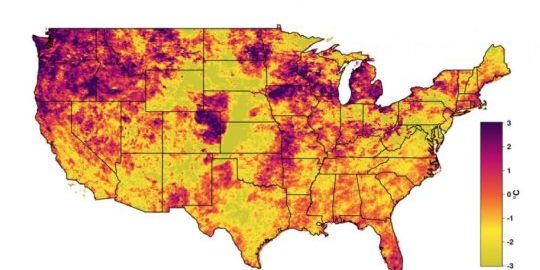 More than 2 billion people worldwide are affected by water shortages, wildfires, crop losses, forest diebacks or other environmental or economic woes brought on by drought.

A new monitoring method developed at Duke University allows scientists to identify the onset of drought sooner — meaning conservation or remediation measures might be put into place sooner to help limit the damage.

“By combining surface and air temperature measurements from thousands of weather stations and satellite images, we can monitor current conditions across an entire region in near real time and identify the specific places where drought-induced thermal stress is occurring,” said James S. Clark, Nicholas Professor of Environmental Sciences at Duke’s Nicholas School of the Environment.

“Other methods now in use are based on data that can take a month or longer to become available,” Clark said. “That means scientists or managers may not know a region is in drought until well after the conditions actually begin.”

Clark and his colleagues have created a free public website, called Drought Eye (http://phenocam.nau.edu/droughteye/), where they post monthly maps pinpointing locations across the continental United States where drought conditions may be occurring, based on the latest thermal stress data.

The thermal stress they’ve measured is the difference between the air temperature at a site and the surface temperature of the plant canopy there. Ordinarily, these canopies are cooled by water evaporating into the air through small pores, or stomata, in the plants’ leaves. This explains why midday temperatures in a forest in summer are cooler than in a city. During prolonged periods without rain, however, the cooling mechanism breaks down. Ground moisture available to the trees becomes limited. To conserve their water supply, the trees close their stomata, allowing the canopy’s surface to heat up.

“This led us to speculate that the canopy-atmosphere differential could provide a simple but highly accurate indicator of drought-induced water stress on a continental scale during warm and dry seasons, when the threat of wildfires and other impacts is most severe and timely monitoring is essential,” said Bijan Seyednasrollah, a 2017 graduate of the Nicholas School, who led the research as part of his doctoral dissertation.

To test the hypothesis, he used measurements of thermal stress from thousands of sites to retroactively “predict” drought conditions across the contiguous U.S. over the past 15 years. He then ran similar tests using other widely employed drought indices to see which of the methods, new or old, produced results that most closely mirrored the historical record.

“Among the drought metrics that we considered, thermal stress had the highest correlation values and most accurately ‘predicted’ the onset of drought in a wide range of atmospheric and climate conditions,” said Seyednasrollah, who is now a postdoctoral environmental scientist at Harvard University and Northern Arizona University.

The new index will enable local authorities to determine the risks of wildfires or identify areas where water use should be restricted in a more timely manner, Clark says. It can also reveal areas where forest dieback — which affects forest health and can add to wildfire risks — is occurring, because trees stop transpiring when they start to die. These diebacks are often linked to pest infestations or other environmental stresses, and are a huge problem in many parts of the West.

Jean-Christophe Domec, a visiting professor at the Nicholas School, co-authored the new study with Seyednasrollah and Clark.

Materials provided by Duke University. Note: Content may be edited for style and length.