Swifts are born to eat and sleep in the air — ScienceDaily 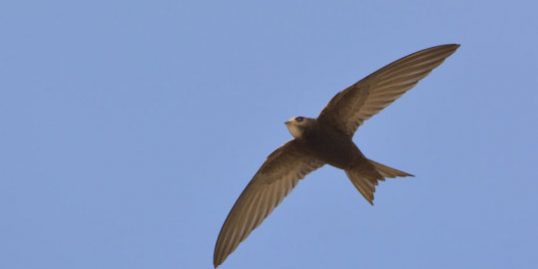 “They eat and sleep while they are airborne. This is something that researchers have believed since the 1950s, and now we can show that it’s true,” says Anders Hedenström, professor at the Department of Biology at Lund University.

Three years ago, the same research team at Lund University observed that within the species common swift, (Apus apus) there were individuals that live in the air for up to ten consecutive months without landing — a world record for being airborne. A different research team has also shown that the alpine swift could live largely in the air.

In the current study, Anders Hedenström and his colleagues Susanne Åkesson, Gabriel Norevik, Arne Andersson and Johan Bäckman at Lund University, and Giovanni Boano from Italy, studied four individuals of the species pallid swift (Apus pallidus). The results show that the birds are in the air without landing for between two and three and a half months, depending on the individual.

Using micro-data loggers attached to the birds, the researchers measured movement when the wings flap. The loggers record activity every five minutes, and the bird’s location once a month. Using this method, the researchers have been able to ascertain that the birds live for months at a time in the air during the winter months, the period of the year they spend in West Africa after the breeding season in Italy.

“They land when they breed under a roof tile or in a hole, otherwise they live in the air. They eat insects while they fly, and when they have reached a high altitude and start gliding, they actually sleep for short periods,” says Anders Hedenström.

“However, it doesn’t actually matter if a species spends three or ten months in the air. Both are adapted to live in that element, they are designed to fly with maximised energy efficiency, regardless of whether they are flapping or gliding,” says Anders Hedenström, continuing:

“It’s always said, of course, that flying is birds’ most energy-intensive activity. I have calculated that a nightingale, which doesn’t live in the air in the same way at all, expends as much energy as a pallid swift, which is in the air all the time.”

Materials provided by Lund University. Note: Content may be edited for style and length.