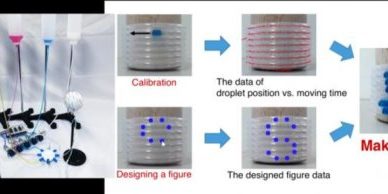 An “interactive surface” refers to an interface whose input and output share a common surface that can be manipulated intuitively with the fingers. However, ordinary multi-touch displays, e.g., liquid crystal displays (LCD), can only provide two-dimensional information, limiting expressions and interactions with such displays to the surface. Novel three-dimensional display systems have been proposed to tackle such limitations.

Researchers at Osaka University propose a novel flexible tube display that is able to take various surface shapes. Information is expressed by streaming colored fluids through the tube and controlling the positions and lengths of the droplets. The tube’s flexibility makes it possible to wrap the tube around the surface of an object and present information on its surface that is difficult to express on a standard two-dimensional display.

The team succeeded in accurately combining two-phase fluids with colored water and air via a pump to create colored water droplets of a designated size and distance from each other.

Air was adopted as the transparent fluid in this research, while colored water was used as the colored fluid. In order to accurately control the sizes and distances of the colored droplets, the system applies the nature of slug flow, a phenomenon in which two fluids of differing phases alternately flow while separating each other. Cyan-, magenta-, yellow-, and white-colored water is utilized to generate droplets of the selected colors and provide various colored information as a standard display. A six-way tube connecter is also utilized to connect and mix the fluids.

By simply bending the tube, one can use it as a wearable display around the arm or as digital signage around a pillar. Furthermore, this system can easily change the kind of information provided by changing the type of liquid flowing through the tube. In addition to its use as a standard display that utilizes colored water, it can also be used as a thermal sensation display with water of varying temperatures. By streaming luminescent liquid, it is also possible to provide information in a dark environment, such as to alert pedestrians on the road at night.

Team leader Yuichi Itoh says, “This system is easy to maintain, replace and modify. We hope that our method will lead to the establishment of a new IT environment and create a market that connects people and information.”

This research was demonstrated at SIGGRAPH ASIA 2018 Emerging Technologies. Documents are available for download at: https://dl.acm.org/citation.cfm?id=3275487.

You can view the system in motion on YouTube at: https://youtu.be/MfM0nvfbjH4.

Materials provided by Osaka University. Note: Content may be edited for style and length.