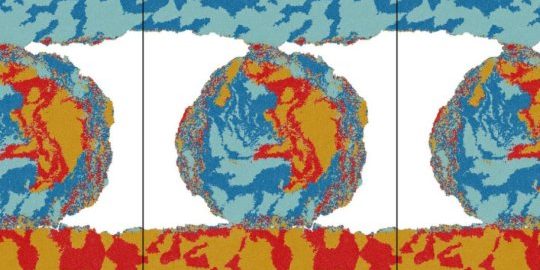 Surface wear describes the process of material loss when two surfaces come into contact with each other. It has significant economic, social and health consequences — just think of the fine particles emitted by moving vehicles. What’s more, it can be observed at all levels, from the nanoscale up to the scale of tectonic faults, with the formation of gouge. There are several wear mechanisms, yet the adhesive type is most common. It takes place when two surfaces — such as two pieces of the same metal — rub against one another and adhere.

One of the parameters that influence the wear mechanism is surface roughness. A better understanding of how surface roughness changes during the wear process would improve our control over this mechanism. This could lead to significant reductions in energy consumption, greenhouse gas emissions and costs.

Researchers at EPFL’s Computational Solid Mechanics Laboratory (LSMS) have taken an important step in this direction. They have digitally simulated how surface roughness changes over time, and their results are in line with experimental results. What sets their simulations apart is their duration: using a method developed at EPFL, the LSMS researchers were able to simulate these mechanisms over an extended period of time. In other words, they managed to capture the entire process — from the initial geometry to the final fractal geometry. Their findings were published on 8 March in Nature Communications.

This study is the LSMS researchers’ third on adhesive wear. Their first study — published in 2016 in Nature Communications — used digital simulations to describe how the process of adhesive wear produced fine particles. In 2017, taking their simulations further, they came out with a second study, appearing this time in Proceedings of the National Academy of Science, demonstrating that it was possible to predict the volume, shape and size of these particles.

Scientists are still far from fully understanding the physics underlying wear, and engineers must still carry out ad hoc experiments for each situation. What is known, however, is that worn surfaces display a characteristic fractal morphology, called self-affine, that has some fundamental properties regardless of the material and the scale. The origins of this self-affine morphology are still unknown.

Little work has been done on how surface roughness changes over time — and it has been mostly experimental. One limitation of experiments is that, because of the debris that forms, it is not easy to monitor how surface morphology changes during the rubbing process. The researchers overcame this problem through their digital simulations, which provide a constant stream of data.

“We used high-performance computer simulations to track the change in surface morphology in 2D materials,” says Enrico Milanese, a PhD student at the LSMS. “In our simulations, we observed that contact between two surfaces always generates a wear debris particle. That particle is then forced to roll between the two surfaces, wearing them down. This led us to conclude that wear debris must be present for the surfaces to develop their characteristic self-affine roughness.”

In the future, the LSMS researchers hope to explore the origins of adhesive wear by applying their simulation approach to 3D models of materials that are of interest to industry.