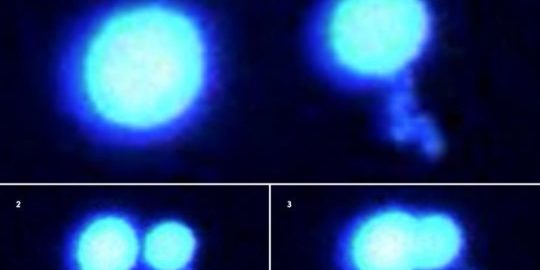 University at Buffalo physicists are using innovative tools to study the properties of a bizarre class of molecules that may play a role in disease: proteins that cluster together to form spherical droplets inside human cells.

The scientists’ latest research sheds light on the conditions that drive such droplets to switch from a fluid, liquidy state to a harder, gel-like state.

Published on Feb. 19 in the journal Biomolecules as a featured article, the study finds that certain protein droplets harden, becoming gelatinous in crowded environments (such as test tubes where lots of other molecules are present, mimicking the congested conditions inside living cells).

“These droplet-forming proteins are a relatively new area of study, so we know very little about their basic properties,” says lead investigator Priya R. Banerjee, PhD, assistant professor of physics in the UB College of Arts and Sciences. “As physicists, we want to quantify the dynamics of these droplets and learn what factors influence them. This is important as the dynamics of protein droplets are a key to their cellular function and dysfunction.

“Prior research has focused on the structure of the proteins themselves, but our work shows that environmental factors are equally important. We see that external conditions can alter the internal state of the droplets, which may affect their function in human cells.”

The research matters because condensating proteins may be involved in health and disease. Recent studies point to potential roles for these droplets in such diverse functions as gene expression, stress response and immune system function.

The research employed two innovative techniques to show how environmental conditions can affect droplets made from FUS or other related proteins.

In a second set of tests, the team employed lasers in a different way — “laser poking” — to study how FUS and related protein droplets react to crowded environments.

In these experiments, Banerjee and colleagues attached fluorescent tags to numerous protein molecules in a single droplet, causing the proteins to glow. The researchers then “poked” the middle of the droplet with a high-intensity laser, a procedure that caused any fluorescent molecules hit by the laser to go permanently dark.

Next, scientists measured how long it took for new glowing proteins to move into the darkened area. This happened quickly in protein droplets floating in sparsely populated buffer solutions. But the recovery time was dramatically slower for droplets suspended in buffer solutions thick with PEG or other compounds — an indication, once again, that protein droplets become gelatinous in crowded environments. The findings applied to both FUS and other related protein droplets with diverse primary structures.

“Our experiments were done in test tubes, but our results suggest that inside living cells, the crowding status could affect the dynamics of protein droplets,” Banerjee says.

One important question that remains is whether and how the fluidity of FUS droplets impacts the protein’s ability to form into solid clumps, as seen in some ALS patients. Banerjee hopes to address this problem through future research.