Nanotechnology makes it possible for mice to see in infrared — ScienceDaily 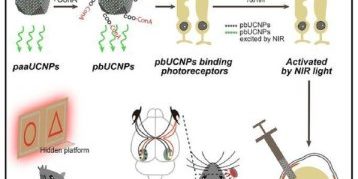 Mice with vision enhanced by nanotechnology were able to see infrared light as well as visible light, reports a study published February 28 in the journal Cell. A single injection of nanoparticles in the mice’s eyes bestowed infrared vision for up to 10 weeks with minimal side effects, allowing them to see infrared light even during the day and with enough specificity to distinguish between different shapes. These findings could lead to advancements in human infrared vision technologies, including potential applications in civilian encryption, security, and military operations.

“The visible light that can be perceived by human’s natural vision occupies just a very small fraction of the electromagnetic spectrum,” says senior author Tian Xue of the University of Science and Technology of China. “Electromagnetic waves longer or shorter than visible light carry lots of information.”

“When light enters the eye and hits the retina, the rods and cones — or photoreceptor cells — absorb the photons with visible light wavelengths and send corresponding electric signals to the brain,” says Han. “Because infrared wavelengths are too long to be absorbed by photoreceptors, we are not able to perceive them.”

In this study, the scientists made nanoparticles that can anchor tightly to photoreceptor cells and act as tiny infrared light transducers. When infrared light hits the retina, the nanoparticles capture the longer infrared wavelengths and emit shorter wavelengths within the visible light range. The nearby rod or cone then absorbs the shorter wavelength and sends a normal signal to the brain, as if visible light had hit the retina.

“In our experiment, nanoparticles absorbed infrared light around 980 nm in wavelength and converted it into light peaked at 535 nm, which made the infrared light appear as the color green,” says Bao.

The researchers tested the nanoparticles in mice, which, like humans, cannot see infrared naturally. Mice that received the injections showed unconscious physical signs that they were detecting infrared light, such as their pupils constricting, while mice injected with only the buffer solution didn’t respond to infrared light.

To test whether the mice could make sense of the infrared light, the researchers set up a series of maze tasks to show the mice could see infrared in daylight conditions, simultaneously with visible light.

In rare cases, side effects from the injections such as cloudy corneas occurred but disappeared within less than a week. This may have been caused by the injection process alone because mice that only received injections of the buffer solution had a similar rate of these side effects. Other tests found no damage to the retina’s structure following the sub-retinal injections.

“In our study, we have shown that both rods and cones bind these nanoparticles and were activated by the near infrared light,” says Xue. “So we believe this technology will also work in human eyes, not only for generating super vision but also for therapeutic solutions in human red color vision deficits.”

Current infrared technology relies on detectors and cameras that are often limited by ambient daylight and need outside power sources. The researchers believe the bio-integrated nanoparticles are more desirable for potential infrared applications in civilian encryption, security, and military operations. “In the future, we think there may be room to improve the technology with a new version of organic-based nanoparticles, made of FDA-approved compounds, that appear to result in even brighter infrared vision,” says Han.

The researchers also think more work can be done to fine tune the emission spectrum of the nanoparticles to suit human eyes, which utilize more cones than rods for their central vision compared to mouse eyes. “This is an exciting subject because the technology we made possible here could eventually enable human beings to see beyond our natural capabilities,” says Xue.