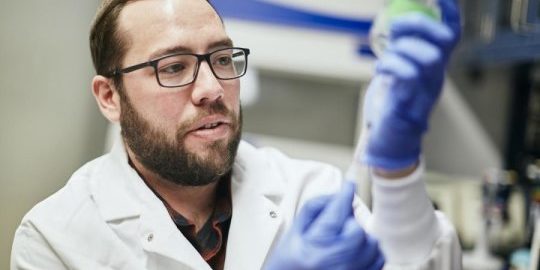 More than 10 miles into the backcountry of Yellowstone National Park, on the edge of the caldera, lives a high-elevation community so diverse that Montana State University scientists call it “incredible, unique and truly weird.”

The community of microorganisms lives in a sapphire blue hot spring 8,600 feet above sea level on the Continental Divide. It’s a pool where volcanic gases rise to mix with snowmelt and rainwater, a phenomenon that allows for exceptionally high levels of diversity, said Dan Colman, assistant research professor in the Department of Microbiology and Immunology in the College of Agriculture and the College of Letters and Science.

Colman found more microbial biodiversity in a thumbnail-sized sample than is present if one were to combine all of the animal and plant biodiversity in Yellowstone. Some were Bacteria and others were Archaea, two of the three domains of life, and fewer than half of them had been detected before in hydrothermal systems. Some may even be modern relatives of ancient microbes, potentially offering lessons about life on early Earth and the potential for life on other planets.

“We think that this work has some pretty broad implications that stretch across several disciplines,” said Colman, lead author of a scientific paper that explained MSU’s findings in the hot spring known as Smoke Jumper 3 or SJ3.

The paper was published Feb. 8 in the online journal Nature Communications. Coauthors were associate professor Eric Boyd and doctoral student Melody Lindsay, both in the Department of Microbiology and Immunology.

Boyd said the paper is unique in that it doesn’t just describe the diversity found in a hot spring; it also explains the conditions that allowed for that diversity to develop and be maintained.

“A lot of people are interested in discovering diversity. That’s the end goal. That’s admirable,” Boyd said. “What Dan wanted to know is why. Why do we have so much diversity, and why are some springs more diverse than others?”

Colman attributes that diversity to the unique geochemistry of the Smoke Jumper Geyser Basin, especially SJ3. He said SJ3 is about the perfect place to begin to understand how geological processes lead to elevated volcanic gases in hydrothermal systems and how that, in turn, supports microbial life that is dependent on chemical sources of energy instead of light energy.

“We show that it is due to its geographic location and, not to mention, that it sits atop one of the world’s largest active volcanoes,” he said. “SJ3 is located at high elevation on the Continental Divide, features that prevent deep hydrothermal water aquifers from reaching this area.”

Colman said SJ3 and other similar springs are fed by high volumes of volcanic gases that are generated by boiling of hydrothermal waters as they rise toward the surface. These gases can mix with near-surface waters, such as recent rainfall or melted snow.

He noted that the volcanic gas that ends up in SJ3 is very different from the gases that are present in our atmosphere in that it lacks oxygen. Rather, the volcanic gas is enriched in hydrogen, methane and carbon monoxide, while the water it infiltrates is very oxidized, or rich in oxygen. The mixing of such different types of fluids probably enhances the conditions that can support microbial life, leading to higher diversity and providing new opportunities to take advantage of their “gassy” environment.

Comparing SJ3 to a buffet, Colman said, “Just like a greater variety of food attracts more and different types of people, so does a hot spring that offers a variety of chemical conditions.”

So why did the MSU researchers focus on this particular hot spring when Yellowstone has 14,000 hot springs they could have investigated?

Long interested in the role of hydrogen in supporting microbes that get their energy from chemicals instead of light, Boyd said Smoke Jumper hot springs and the park’s other hot springs were surveyed in the 1920s and early 1930s by scientists from the Carnegie Institute of Washington. They published their findings in 1935, and later work by the U.S. Geological Survey pointed to especially high volumes of volcanic gas in the Smoke Jumper Geyser Basin. Knowing this, Boyd and four others spent a day in Yellowstone in July 2014, collecting samples from SJ3 and three nearby hot springs.

“Just looking at a hot spring doesn’t necessarily tell you how biodiverse it is,” Boyd said. “But as soon as we measured the pH of the spring and made other measurements, we knew we were sampling a unique spring.”

Colman said it took roughly another three years to run the genetic sequencing tests and analyze the results that revealed the diversity of the microbial community. Most hot springs contain a couple of types of microbial organisms. This one held representatives from almost half of all the known groups of microorganisms living on Earth, including dozens and dozens of uncultivated archaeal and bacterial lineages.

“Moreover, many of the lineages that we detected in SJ3 have recently garnered significant attention because of their potential to inform on the evolution of methanogenesis (the biological creation of methane), in addition to previously unknown types of methanogens, and deep branching microbial lineages associated with subsurface environments and many other enigmatic lineages,” Colman said. “It is likely that additional studies of such systems and the intriguing organisms within them will yield additional important insights into microbial ecology and will shed new light on their role in the evolution of biogeochemical processes.”