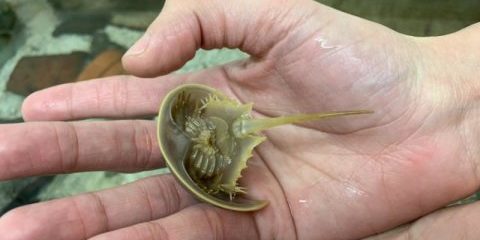 Blue-blooded and armored with 10 spindly legs, horseshoe crabs have perhaps always seemed a bit out of place.

First thought to be closely related to crabs, lobsters and other crustaceans, in 1881 evolutionary biologist E. Ray Lankester placed them solidly in a group more similar to spiders and scorpions. Horseshoe crabs have since been thought to be ancestors of the arachnids, but molecular sequence data have always been sparse enough to cast doubt.

By analyzing troves of genetic data and considering a vast number of possible ways to examine it, the scientists now have a high degree of confidence that horseshoe crabs do indeed belong within the arachnids.

“By showing that horseshoe crabs are part of the arachnid radiation, instead of a lineage closely related to but independent of arachnids, all previous hypotheses on the evolution of arachnids need to be revised,” says Ballesteros, a postdoctoral researcher in Sharma’s lab. “It’s a major shift in our understanding of arthropod evolution.”

Arthropods are often considered the most successful animals on the planet since they occupy land, water and sky and include more than a million species. This grouping includes insects, crustaceans and arachnids.

Horseshoe crabs have been challenging to classify within the arthropods because analysis of the animals’ genome has repeatedly shown them to be related to arachnids like spiders, scorpions, mites, ticks and lesser-known creatures such as vinegaroons. Yet, “scientists assumed it was an error, that there was a problem with the data,” says Ballesteros.

Moreover, horseshoe crabs possess a mix of physical characteristics observed among a variety of arthropods. They are hard-shelled like crabs but are the only marine animals known to breathe with book gills, which resemble the book lungs spiders and scorpions use to survive on land.

Only four species of horseshoe crabs are alive today, but the group first appeared in the fossil record about 450 million years ago, together with mysterious, extinct lineages like sea scorpions. These living fossils have survived major mass extinction events and today their blood is used by the biomedical industry to test for bacterial contamination.

Age is just one of the problems inherent in tracing their evolution, say Ballesteros and Sharma, since searching back through time to find a common ancestor is not easy to accomplish. And evidence from the fossil record and genetics indicates evolution happened quickly among these groups of animals, convoluting their relationships to one another.

“One of the most challenging aspects of building the tree of life is differentiating old radiations, these ancient bursts of speciation,” says Sharma, a professor of integrative biology. “It is difficult to resolve without large amounts of genetic data.”

Even then, genetic comparisons become tricky when looking at the histories of genes that can either unite or separate species. Some genetic changes can be misleading, suggesting relationships where none exist or dismissing connections that do. This is owed to phenomena such as incomplete lineage sorting or lateral gene transfer, by which assortments of genes aren’t cleanly made across the evolution of species.

Ballesteros tested the complicated relationships between the trickiest genes by comparing the complete genomes of three out of the four living horseshoe crab species against the genome sequences of 50 other arthropod species, including water fleas, centipedes and harvestmen.

Using a complex set of matrices, taking care not to introduce biases in his analysis, he painstakingly teased the data apart. Still, no matter which way Ballesteros conducted his analysis, he found horseshoe crabs nested within the arachnid family tree.

He says his approach serves as a cautionary tale to other evolutionary biologists who may be inclined to cherry-pick the data that seem most reliable, or to toss out data that don’t seem to fit. Researchers could, for example, “force” their data to place horseshoe crabs among crustaceans, says Sharma, but it wouldn’t be accurate. The research team tried this and found hundreds of genes supporting incorrect trees.

Ballesteros encourages others to subject their evolutionary data to this kind of rigorous methodology, because “evolution is complicated.”

Why horseshoe crabs are water dwellers while other arachnids colonized land remains an open question. These animals belong to a group called Chelicerata, which also includes sea spiders. Sea spiders are marine arthropods like horseshoe crabs, but they are not arachnids.

“What the study concludes is that the conquest of the land by arachnids is more complex than a single tradition event,” says Ballesteros.

It’s possible the common ancestor of arachnids evolved in water and only groups like spiders and scorpions made it to land. Or, a common ancestor may have evolved on land and then horseshoe crabs recolonized the sea.

“The big question we are after is the history of terrestrialization,” says Sharma.

For Ballesteros, who is now studying the evolution of blindness in spiders living deep within caves in Israel, his motivations get to the heart of human nature itself.

“I get to look with childish curiosity and ask: ‘How did all this diversity come to be?'” he says. “It’s incredible what exists, and I never thought I would have the privilege to be able to do this.”

The study was funded by the M. Guyer postdoctoral fellowship and supported by National Science Foundation grant IOS-1552610.