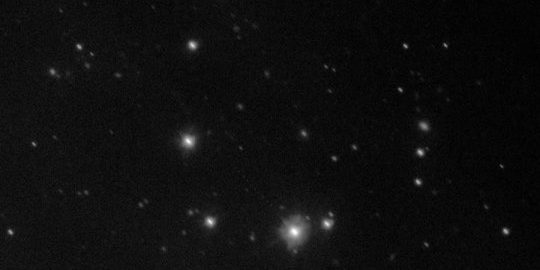 Gaia, operated by the European Space Agency (ESA, surveys the sky from orbit to create the largest, most precise, three-dimensional map of our Galaxy. One year ago, the Gaia mission produced its much-awaited second data release, which included high-precision measurements — positions, distance and proper motions — of more than one billion stars in our Milky Way galaxy. This catalogue has enabled transformational studies in many fields of astronomy, addressing the structure, origin and evolution the Milky Way and generating more than 1700 scientific publications since its launch in 2013.

In order to reach the accuracy necessary for Gaia’s sky maps, it is crucial to pinpoint the position of the spacecraft from Earth. Therefore, while Gaia scans the sky, gathering data for its stellar census, astronomers regularly monitor its position using a global network of optical telescopes, including the VST at ESO’s Paranal Observatory. The VST is currently the largest survey telescope observing the sky in visible light, and records Gaia’s position in the sky every second night throughout the year.

“Gaia observations require a special observing procedure,” explained Monika Petr-Gotzens, who has coordinated the execution of ESO’s observations of Gaia since 2013. “The spacecraft is what we call a ‘moving target’, as it is moving quickly relative to background stars — tracking Gaia is quite the challenge!”

“The VST is the perfect tool for picking out the motion of Gaia,” elaborated Ferdinando Patat, head of the ESO’s Observing Programmes Office. “Using one of ESO’s first-rate ground-based facilities to bolster cutting-edge space observations is a fine example of scientific cooperation.”

“This is an exciting ground-space collaboration, using one of ESO’s world-class telescopes to anchor the trailblazing observations of ESA’s billion star surveyor,” commented Timo Prusti, Gaia project scientist at ESA.

The VST observations are used by ESA’s flight dynamics experts to track Gaia and refine the knowledge of the spacecraft’s orbit. Painstaking calibration is required to transform the observations, in which Gaia is just a speck of light among the bright stars, into meaningful orbital information. Data from Gaia’s second release was used to identify each of the stars in the field of view, and allowed the position of the spacecraft to be calculated with astonishing precision — up to 20 milliarcseconds.

“After careful and lengthy data processing, we have now achieved the accuracy required for the ground-based observations of Gaia to be implemented as part of the orbit determination,” says Martin Altmann, lead of the Ground Based Optical Tracking (GBOT) campaign at the Centre for Astronomy of Heidelberg University, Germany.

The GBOT information will be used to improve our knowledge of Gaia’s orbit not only in observations to come, but also for all the data that have been gathered from Earth in the previous years, leading to improvements in the data products that will be included in future releases.

Materials provided by ESO. Note: Content may be edited for style and length.