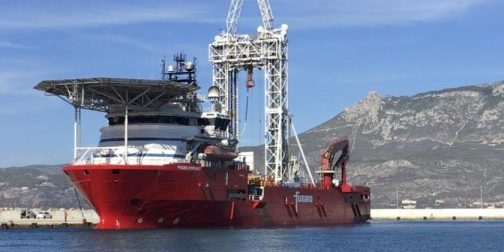 Young rift basins, such as the Gulf of Corinth, are known to be sensitive recorders of past changes in climate and sea level and of the chemical and biological conditions of the waters they contain. Nonetheless, the changes observed in the Gulf of Corinth, published in the journal Nature, were more dramatic and complex than anticipated. The volume of sediment filling the rift basin increased dramatically when the Earth was experiencing glaciated conditions compared with periods when the Earth was not glaciated.

This is an important discovery for understanding the impact that global climate fluctuations have on the history of sedimentation, particularly for the earliest sediments deposited as new ocean basins form. The process of continental rifting is fundamental for the formation of new ocean basins, and these basins are the source of a large proportion of the Earth’s hydrocarbon resources. Therefore their history of sedimentation informs how hydrocarbons are formed and where they may collect.

The results come from a new scientific ocean drilling expedition conducted as part of the International Ocean Discovery Program (IODP) and are published this week in the journal Scientific Reports in an article entitled “High-resolution record reveals climate-driven environmental and sedimentary changes in an active rift.” IODP Expedition 381 went to sea from October to December in 2017 on the drilling vessel Fugro Synergy, and the sediment cores and downhole data retrieved were analysed in February, 2018 by a 35-member team of international geoscientists. The Expedition and new publication was led by Professor Lisa McNeill from the University of Southampton, UK and Professor Donna Shillington of the Lamont-Doherty Earth Observatory of Columbia University, USA.

“This is the first long and high-resolution sediment record of the early rifting process ever obtained,” Lisa McNeill comments. “At one site, an expanded 700 m section records the last 800,000 years of rift basin history.” The cores have revealed how the conditions changed as global-climate and ice sheet growth reduced sea level and isolated the Corinth basin from the open ocean. The reduced salinity severely restricted the range of organisms that could inhabit the waters under such stressed conditions. These fluctuations occurred about once every 100,000 years as global climate changed.

The most striking result is that the rate of sediment flux into the basin increases by a factor of 2-7 during the globally glaciated periods relative to the non-glaciated periods. This is recorded in the relative thicknesses of the sedimentary fill of the rift basin during these different periods. Donna Shillington explains, “We argue that this change is not caused by increased precipitation and erosion during glacial times, but rather by a reduction in vegetation cover and a change in the type of vegetation during glacial periods leading to enhanced erosion.” This is an important result for understanding the Eastern Mediterranean climate at this time and for the impact of global climate fluctuations on the rate of filling of sedimentary basins. Such basins are the source of a large proportion of the Earth’s hydrocarbon resources and their history of sedimentation, particularly in the early phase of rifting, informs how hydrocarbon source and reservoir rocks develop.

The science team also found that the sedimentation rates in the Holocene (the last 10,000 years) were much higher than earlier non-glaciated time periods. This is probably due to the human impacts on the landscape of mainland Greece, deforesting the landscape and increasing slope erosion rates over a period of about 4000 years.

1. The Science Team of the International Ocean Discovery Program (IODP) Expedition 381 included 35 scientists of different geoscience disciplines from Australia, Brazil, China, France, Germany, Greece, India, Norway, Spain, the United Kingdom, and the United States, nine of whom sailed onboard the Fugro Synergy October to December of 2017 in the Gulf of Corinth, Greece, to collect the cores and data. After the offshore phase, the whole Science Team met at the IODP Bremen Core Repository (BCR), located at MARUM — Center for Marine Environmental Sciences at the University of Bremen, Germany, in February 2018 to split, analyze and sample the cores and analyze the data collected. The scientists are continuing to analyse the cores and samples over the next 2 to 4 years to extract more information from this unique new dataset.

2. The four main themes of the expedition are:

4. The expedition is conducted by the European Consortium for Ocean Research Drilling (ECORD) as part of the International Ocean Discovery Program (IODP). The International Ocean Discovery Program (IODP) is an international marine research program supported by 23 countries, which explores Earth’s history and structure recorded in seafloor sediments and rocks, and monitors sub-seafloor environments. Through multiple platforms — a feature unique to IODP — scientists sample the deep biosphere and sub-seafloor ocean, environmental change, processes and effects, and solid earth cycles and dynamics.

Materials provided by University of Southampton. Note: Content may be edited for style and length.