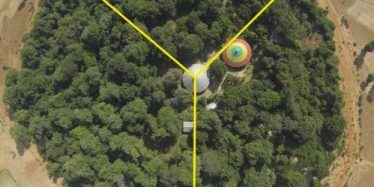 Human disturbance reduces forest density, biomass, and richness of species in sacred church forests of northern Ethiopia, according to new research by Catherine L. Cardelús of Colgate University in Hamilton, NY, and colleagues. These findings appear in PLOS ONE.

Due to land-use changes, such as roads and agriculture, forested area that once covered much of northern Ethiopia has disappeared. The last remaining forests exist in small patches with an average area of five hectares. The country’s South Gondar region contains 1,022 of these forests, which are considered sacred, as each surrounds a church of the Ethiopian Orthodox Tewahido Church.

In the new study, the researchers analyzed 44 sacred church forests in South Gondar, examining how human disturbance — such as human-built structures and planted exotic species — affect forest biomass, as well as the richness and density of tree species and seedlings.

The analysis revealed human disturbances in more than half of the studied forest area. Much of this disturbance consisted of buildings and clearings for human gatherings. The findings show that human disturbance is a major factor linked to reduced species richness, density, and biomass in the small forests; these were also linked to smaller forest size.

Protective walls built to keep out grazing animals, which surround some of the sacred forests, had only a small positive effect on seedling communities. Unexpectedly, distance from the nearest city did not appear to affect a forest’s level of human disturbance.

While human activities in these small forests are culturally important, they can impact the ability for seedlings to establish and compromise the potential for forest regeneration. Based on their findings, the researchers recommend conservation strategies to protect these sacred forests, including restorative planting within and between the forests, removal of weeds and exotic plants, limitation of new clearings, and protection of large trees that serve as critical sources of seeds.

Cardelús adds: “Ethiopian sacred church forests are the last remaining forests in northern Ethiopia and are biodiversity refugia and integral to the lives of local people. The integrity of these sacred forests is compromised by high disturbance (56%), which is negatively associated with decreased species richness and lower tree abundance, which may negatively impact human livelihoods.”