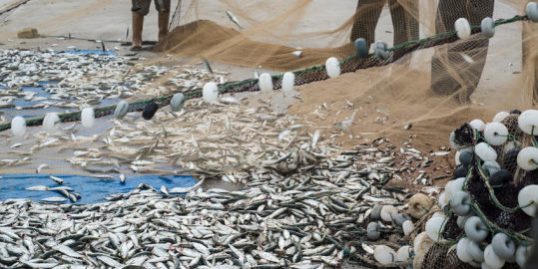 Fish provide a vital source of protein for over half the world’s population, with over 56 million people employed by or subsisting on fisheries. But climate change is beginning to disrupt the complex, interconnected systems that underpin this major source of food.

A team of scientists led by Christopher Free, a postdoctoral scholar at UC Santa Barbara’s Bren School of Environmental Science & Management, has published an investigation of how warming waters may affect the productivity of fisheries. The results appear in the journal Science.

The study looked at historical abundance data for 124 species in 38 regions, which represents roughly one-third of the reported global catch. The researchers compared this data to records of ocean temperature and found that 8 percent of populations were significantly negatively impacted by warming, while 4 percent saw positive impacts. Overall, though, the losses outweigh the gains.

“We were surprised how strongly fish populations around the world have already been affected by warming,” said Free, “and that, among the populations we studied, the climate ‘losers’ outweigh the climate ‘winners.'”

Region had the greatest influence on how fish responded to rising temperatures, according to the study. Species in the same region tended to respond in similar ways. Fishes in the same families also showed similarities in how they responded to changes. The researchers reasoned that related species would have similar traits and lifecycles, giving them similar strengths and vulnerabilities.

When examining how the availability of fish for food has changed from 1930 to 2010, the researchers saw the greatest losses in productivity in the Sea of Japan, North Sea, Iberian Coastal, Kuroshio Current and Celtic-Biscay Shelf ecoregions. On the other hand, the greatest gains occurred in the Labrador-Newfoundland region, Baltic Sea, Indian Ocean and Northeastern United States.

Although the changes in fisheries productivity have so far been small, there are vast regional discrepancies. For instance, East Asia has seen some of the largest warming-driven declines, with 15 to 35 percent reductions in fisheries productivity. “This means 15 to 35 percent less fish available for food and employment in a region with some of the fastest growing human populations in the world,” said Free. Mitigating the impacts of regional disparities will be a major challenge in the future.

These findings highlight the importance of accounting for the effects of climate change in fisheries management. This means coming up with new tools for assessing the size of fish populations, new strategies for setting catch limits that consider changing productivity, and new agreements for sharing catch between winning and losing regions, Free explained.

“Knowing exactly how fisheries will change under future warming is challenging, but we do know that failing to adapt to changing fisheries productivity will result in less food and fewer profits relative to today,” Free explained.

Preventing overfishing will be a critical part of addressing the threat that climate change poses to the world’s fisheries. “Overfishing presents a one-two punch,” said Free. It makes fish populations more vulnerable to warming, while warming hinders the recovery of overfished populations.

Free also stressed that ocean warming is just one of many processes affecting marine life and the industries that rely on it. Ocean acidification, falling oxygen levels and habitat loss will also impact marine life. More research is necessary to fully understand how climate change will affect fish populations and the livelihoods of people that depend on them.

Materials provided by University of California – Santa Barbara. Original written by Harrison Tasoff. Note: Content may be edited for style and length.