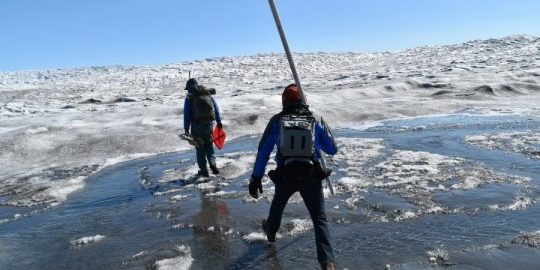 Rainy weather is becoming increasingly common over parts of the Greenland ice sheet, triggering sudden melting events that are eating at the ice and priming the surface for more widespread future melting, says a new study. Some parts of the ice sheet are even receiving rain in winter — a phenomenon that will spread as climate continues to warm, say the researchers. The study appears this week in the European scientific journal The Cryosphere.

Greenland has been losing ice in recent decades due to progressive warming. Since about 1990, average temperatures over the ice sheet have increased by as much as 1.8 degrees C (3.2F) in summer, and up to 3 degrees C (5.4F) in winter. The 660,000-square-mile sheet is now believed to be losing about 270 billion tons of ice each year. For much of this time, most of this was thought to come from icebergs calving into the ocean, but recently direct meltwater runoff has come to dominate, accounting for about 70 percent of the loss. Rainy weather, say the study authors, is increasingly becoming the trigger for that runoff.

The researchers combined satellite imagery with on-the-ground weather observations from 1979 to 2012 in order to pinpoint what was triggering melting in specific places. Satellites are used to map melting in real time because their imagery can distinguish snow from liquid water. About 20 automated weather stations spread across the ice offer concurrent data on temperature, wind and precipitation. Combining the two sets of data, the researchers zeroed in on more than 300 events in which they found the initial trigger for melting was weather that brought rain. “That was a surprise to see,” said the study’s lead author, Marilena Oltmanns of Germany’s GEOMAR Centre for Ocean Research. She said that over the study period, melting associated with rain and its subsequent effects doubled during summer, and tripled in winter. Total precipitation over the ice sheet did not change; what did change was the form of precipitation. All told, the researchers estimate that nearly a third of total runoff they observed was initiated by rainfall.

Melting can be driven by a complex of factors, but the introduction of liquid water is one of the most powerful, said Marco Tedesco, a glaciologist at Columbia University’s Lamont-Doherty Earth Observatory and coauthor of the study. Warm air, of course, can melt ice directly, but is not very efficient by itself, he said. However, warmer temperatures can produce cascading effects. One is that they make it more likely that atmospheric conditions will pass the threshold where precipitation comes down as rain, not snow. Liquid water carries a great deal of heat, and when it soaks into a snowy surface, it melts the snow around it, releasing more energy. Meanwhile, the warm air that brought the rain often forms clouds, which hem in the heat.

This combination of factors produces a pulse of melting that feeds on itself, and well outlasts the rain itself, often by several days. Furthermore, the scientists found that the length of these pulses increased over the decades they analyzed, in cold weather from two days to three, and in the brief summer, from two days to five.

There are longer-term effects, say the study authors. They believe that part of the meltwater runs off, but the rest refreezes in place, morphing normally fluffy, reflective snow on or near the surface into darker, denser masses of ice. This ice absorbs solar radiation more easily than snow, so when the sun comes out, it melts more easily, producing more liquid water, which feeds more melting, in a vicious feedback loop. This, said Tedesco, has led to more and earlier melting in the summer. And because the surface has been hardened into ice, much of that meltwater can more easily flow off the ice sheet toward the sea.

“If it rains in the winter, that preconditions the ice to be more vulnerable in the summer,” said Tedesco. “We are starting to realize, you have to look at all the seasons.”

While rain is hitting increasingly far-flung parts of the ice in summer, winter rainfall so far appears mostly confined to lower elevations in south and southwest Greenland. It is brought in by moist, relatively warm ocean winds from the south, which some communities in other areas call neqqajaaq. These winds may be getting more common due to climate-induced shifts in the jet stream. The elevation of the ice sheet increases further inland and it is thus colder and snowier there; but if average temperatures continue to increase as expected, the line where the moisture comes down as rain instead of snow will rapidly move inward, upward and northward. “The ice should be gaining mass in winter when it snows, but an increasing part of the mass gain from precipitation is lost by melt,” said Oltmanns.

Greenland is not the only place in the far north affected by increasing rain. In recent years, anomalous winter rains have hit the northern Canadian tundra, then refrozen over the surface, sealing in plants that caribou and musk oxen normally forage through the loose snow; in some years, this has decimated herds. And a just-published study from near Fairbanks, Alaska, shows that increasing spring rains are percolating down through the permafrost, thawing it and releasing large amounts of methane, a highly efficient greenhouse gas.

Between 1993 and 2014, global sea-level rise accelerated from about 2.2 millimeters a year to 3.3 millimeters, and much of that acceleration is thought to be due to melting in Greenland. Projections of sea-level rise for the end of this century generally range from two to four feet, but most projections do not yet account for what may happen to the ice in Greenland, nor with the much larger mass in Antarctica, because understanding of the physics is still not advanced enough.

Richard Alley, a prominent glaciologist at Pennsylvania State University, said that the new paper adds to the understanding. “The big picture is clear and unchanged,” he said. “Warming melts ice,” But, he added, the specific processes that will carry this “need to be quantified, understood and incorporated into models. This new paper does important work understanding and quantifying.”

The study was coauthored by Fiammetta Straneo of Scripps Institution of Oceanography.