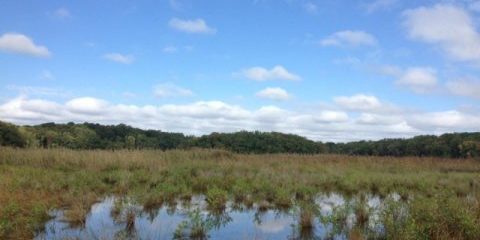 Some wetlands perform better under pressure. A new study revealed that when faced with sea-level rise, coastal wetlands respond by burying even more carbon in their soils.

Coastal wetlands, which include marshes, mangroves and seagrasses, already store carbon more efficiently than any other natural ecosystem, including forests. The latest study, published March 7 in the journal Nature, looked at how coastal wetlands worldwide react to rising seas and discovered they can rise to the occasion, offering additional protection against climate change.

“Scientists know a fair amount about the carbon stored in our local tidal wetlands, but we didn’t have enough data to see global patterns,” said Pat Megonigal, a co-author and soil scientist at the Smithsonian Environmental Research Center.

To get a global picture, scientists from Australia, China, South Africa and the U.S. pooled data from 345 wetland sites on six continents. They looked at how those wetlands stored carbon for up to 6,000 years and compared whether sea levels rose, fell or stayed mostly the same over the millennia.

For wetlands that had faced rising seas, carbon concentrations doubled or nearly quadrupled in just the top 20 centimeters of soil. When the scientists looked deeper, at 50 to 100 centimeters beneath the surface, the difference hit five to nine times higher.

The extra boost comes because the carbon added to wetland soils by plant growth and sediment is buried faster as wetlands become wetter. Trapped underwater with little to no oxygen, the organic detritus does not decompose and release carbon dioxide as quickly. And the higher the waters rise, the more underwater storage space exists for the carbon to get buried.

North America and Europe faced the most sea-level rise over the past 6,000 years. Melting glaciers from the last ice age caused water levels to rise, increasing coastal flooding. Continents in the southern hemisphere, by contrast, were largely glacier-free and experienced stable or even falling sea levels.

However, the scene is changing now. The steady march of climate change is exposing even wetlands farther south to accelerated sea-level rise.

“They may be the sleeping giants of global carbon sequestration,” said lead author Kerrylee Rogers of the University of Wollongong in Australia. Half of the world’s tidal marshland grows along the coastlines of southern Africa, Australia, China and South America. If those wetlands doubled their carbon sequestration — as other wetlands in the study did in response to sea-level rise — they could sequester another 5 million tons of atmospheric carbon every year. That is the equivalent of taking more than a million cars off the road.

The trick, of course, is to ensure wetlands do not drown and disappear if waters rise too quickly.

“Preservation of coastal wetlands is critical if they are to play a role in sequestering carbon and mitigating climate change,” Rogers said.

For coastal wetlands to survive, they need space to migrate inland. Whether they have enough space depends largely on how societies prioritize many competing goals. One thing is certain: With climate change ramping up, wetlands can protect people in more ways than one, if given enough breathing room.

Materials provided by Smithsonian. Note: Content may be edited for style and length.