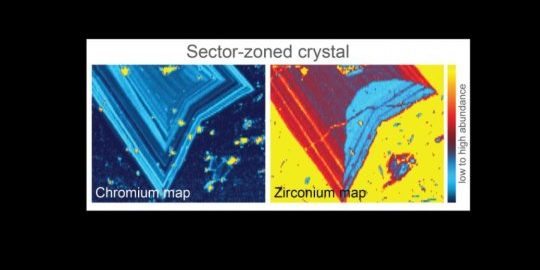 The University of Queensland-led study analysed crystals in Italy’s famous Mount Etna to reveal how quickly magma moves to the surface.

Dr Teresa Ubide, from UQ’s School of Earth and Environmental Sciences, said the research would provide a better understanding of volcanic systems and improve frameworks for monitoring volcanoes.

“By looking at the so-called magma plumbing systems — I think of them as the ‘inner personalities’ of volcanoes — we can better interpret the signs of magma movement under our feet,” Dr Ubide said.

“The new information on magma transport prior to past volcanic eruptions can provide context to help better respond to future monitoring signals, like seismic measurements from earthquakes.”

Dr Ubide and her team have analysed variations in the chemical composition of volcanic crystals, which form in a chemical pattern known as “sector zoning.”

“Volcanologists and mineralogists have observed sector zoning in crystals for decades, noticing that it might develop when crystals form rapidly,” she said.

“But because the exact origin and implications of sector-zoned crystals in magma were poorly understood, they were typically disregarded in the study of pre-eruptive processes inside volcanoes.

“Now we’ve discovered that they not only record detailed magmatic histories and eruption triggers, but might also provide information on the velocity of magma transport to the surface.”

“We’ve been using a ‘cold’ beam laser to remove a thin layer from the surface of the crystals,” Dr Ubide said.

“Then this tiny amount of material is put into a mass spectrometer, an instrument that measures the composition of ‘trace’ elements, reading elements that might weigh lower than 0.1 per cent of the original object.

“We found that the changes in the trace elements in these crystals are extremely sensitive to the processes that take place inside volcanoes, like magma storage and cooling, magma mixing, magma transport and magma’s ascent to the surface.

“It’s an amazing snapshot of what is happening inside volcanoes, providing key insights into their internal plumbing system and helping us better understand these incredible natural wonders.”

Materials provided by University of Queensland. Note: Content may be edited for style and length.