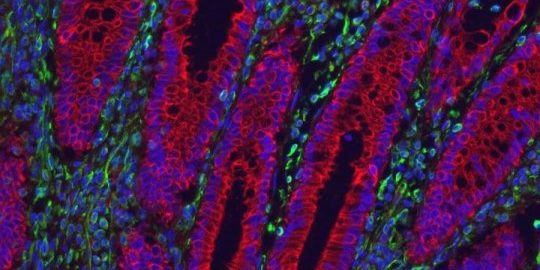 People with inflammatory bowel disease (IBD) live with frequent, miserable episodes of abdominal pain, diarrhea and in severe cases, rectal bleeding. Standard treatments are aimed at directly suppressing inflammation, but many patients find little relief from such an approach.

Now, researchers at Washington University School of Medicine in St. Louis have found a compound that may treat IBD without directly targeting inflammation. The compound tamps down the activity of a gene linked to blood clotting. They discovered that the gene was turned on at sites of intestinal inflammation and damage, and blocking its activity reduces IBD symptoms in mice.

Notably, the gene is especially active in people with severe disease and in those who don’t respond to potent biologic drugs known as TNF blockers that are prescribed to treat severe IBD.

The findings, published March 6 in Science Translational Medicine, may be a path to new therapeutic options for people whose IBD can’t be controlled effectively with current treatments.

“There’s a lot of interest in novel therapeutic approaches for IBD because inhibiting inflammatory molecules doesn’t work for all patients,” said senior author Thaddeus S. Stappenbeck, MD, PhD, the Conan Professor of Laboratory and Genomic Medicine. “We found a unique target that’s not an inflammatory molecule, and yet blocking it reduces inflammation and signs of disease, at least in mice. If further research bears out our findings, we think this target could be helpful to a greater number of patients.”

More than 1 million people in the United States have IBD, which includes Crohn’s disease and ulcerative colitis. Both conditions are marked by out-of-control inflammation but in different parts of the gastrointestinal tract. They typically are treated first with general anti-inflammatory drugs such as corticosteroids. In more severe cases, people are given more potent immune suppressors such as TNF inhibitors, which neutralize an important immune protein. TNF inhibitors are sold under brand names such as Humira and Remicade. Immunosuppressants can be very effective, but they do have side effects such as increased risk of infection and cancer.

While researchers have focused countless hours on finding drugs to dampen IBD patients’ unruly immune systems, there are other untapped sources for therapies of the disease — such as the behavior of the epithelial cells that line the gut. Stappenbeck and first author Gerard Kaiko, PhD, a former postdoctoral researcher in Stappenbeck’s lab who is now at the University of Newcastle in Australia, realized that overlooked aspects of IBD might be a rich source of new drug targets.

To find genes that play a role in IBD through noninflammatory pathways, Kaiko, Stappenbeck and colleagues analyzed 1,800 intestinal biopsies from 14 independent, publicly available IBD datasets. The biopsies came from different studies, variously comparing people with IBD to healthy people; samples taken from inflamed and unaffected parts of the intestine; or people with mild, moderate and severe cases of IBD.

This analysis revealed that a group of genes related to blood clotting are turned on in IBD. The finding fits with the longstanding observation that people with IBD are two to three times as likely as the general population to develop problems with blood clots, with the risk especially high during a flare-up.

With the help of co-author Jacqueline Perrigoue, PhD, and colleagues at Janssen Research & Development, the researchers whittled down the list of genes to a few that played a role in both inflammatory and epithelial cells. One in particular stood out: a gene called SERPINE-1. This gene and its corresponding protein were found at high levels in inflamed parts of the gut in IBD patients. Both also are involved in an early step in the blood-clotting process but hadn’t been linked to inflammation previously.

To verify the role of the gene and its protein in gut inflammation, the researchers gave mice a chemical that causes gut inflammation similar to IBD, or a harmless chemical for comparison. The mice that received the damaging chemical lost weight, their intestines had signs of injury with many inflammatory cells and proteins, and the SERPINE-1 gene was expressed six times higher than in mice that received the harmless chemical.

When the mice with IBD-like symptoms were treated with a compound called MDI-2268 that blocked the activity of the protein, they fared much better. They lost less weight, and their intestines showed less destruction and inflammation than mice that were treated with a placebo. The compound was developed by Daniel A. Lawrence, PhD, of the University of Michigan.

“What’s most exciting here is that SERPINE-1 and its protein seems to be most highly expressed in people with the most severe disease and those who don’t respond to immunosuppressive biologics,” Stappenbeck said. “No one’s ever thought of targeting something like this. But here we’ve found something that might help lots of people with IBD, especially the ones who aren’t benefiting much from current therapies.”