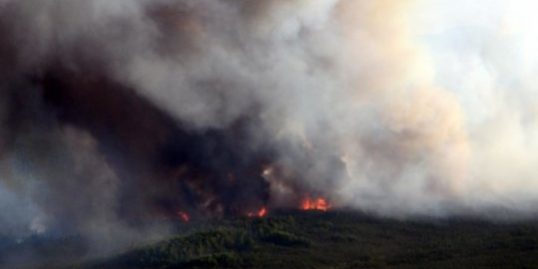 In a recent study, University of Montana researchers explored the ways forest succession and climate variability interacted and influenced fires in Alaska’s boreal forests over the past four centuries — from 1550 to 2015.

As part of his master’s thesis work in the Systems Ecology program in the W.A. Franke College of Forestry and Conservation, Hoecker collected lake-sediment cores near the Nowitna National Wildlife Refuge in central Alaska, a fire-prone area that also has many lakes.

“Charcoal produced by fires is blown into lakes and settles to the bottom, forming a stable record of the fire history in the layers of sediment, much like fire scars on tree rings,” Hoecker said. “By carefully measuring changes in charcoal through time, we deduced changes in fire activity. We paired fire history records from seven lakes with records of tree ages and a record of climate. Then, we compared these records, looking for patterns in how the processes interacted.”

Hoecker and co-author Phil Higuera, an associate professor of fire ecology in UM’s Department of Ecosystem and Conservation Sciences, found that years of extensive fire activity usually occurred several decades after trees established, suggesting that the development of mature forest across the study landscape was necessary to support widespread burning. They also saw that there was more fire activity in years when temperatures were higher, especially over the past 100 years.

“In the 20th century, fires and temperatures both increased significantly, beyond what either had been at any earlier point in our 450-year record,” Hoecker said. “This indicates that fires are happening more frequently than they have for many centuries and could cause big changes in the character of forests in Alaska.”

Boreal forests cover over 10 percent of the Earth’s land area, and because they store massive amounts of carbon, both above and below ground, they are partly responsible for regulating Earth’s climate. While wildfires have burned in boreal forests for millennia, changes in fire activity could alter the way these forests affect regional and global climates, the researchers said.

“Understanding how slowly varying processes like succession and climate affect fire activity is difficult to do in a single human lifetime,” Higuera said. “Paleoecological records, like the lake sediments used in this study, extend the window of observation further into the past, allowing scientists to understand long-term change and put ongoing change into context.”

Hoecker said the paper helps address a number of questions related to the impact of climate change on fire activity. First, it helps tease apart the roles climate and vegetation play.

“We found that both were players: Fires require abundant fuel and warm, dry climate years,” he said. “But when temperatures really started increasing in the 20th century, fire activity did too. This suggests that climate is a key limiting factor for extensive burning in Alaska’s boreal forest.”

The study also helps place this increase into the broader context of the past.

“The increases in fire activity we saw in the 20th century are particularly significant when you compare them to the previous several centuries,” Hoecker said. “That longer record suggests that the trajectory of increasing fire activity we are seeing in Alaska may be unprecedented over a very long period.”

Hoecker graduated from UM in 2017 with a master’s in systems ecology and is now a Ph.D. student at the University of Wisconsin, Madison.