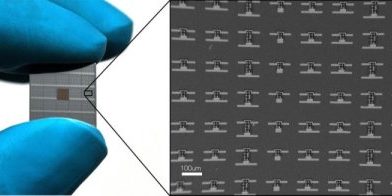 Researchers have harnessed the latest nanofabrication techniques to create bug-shaped robots that are wirelessly powered, able to walk, able to survive harsh environments and tiny enough to be injected through an ordinary hypodermic needle.

“When I was a kid, I remember looking in a microscope, and seeing all this crazy stuff going on. Now we’re building stuff that’s active at that size. We don’t just have to watch this world. You can actually play in it,” said Marc Miskin, who developed the nanofabrication techniques with his colleagues professors Itai Cohen and Paul McEuen and researcher Alejandro Cortese at Cornell University while Miskin was a postdoc in the laboratory for atomic and solid state physics there. In January, he became an assistant professor of electrical and systems engineering at the University of Pennsylvania.

Miskin will present his microscopic robot research on this week at the American Physical Society March Meeting in Boston. He will also participate in a press conference describing the work. Information for logging on to watch and ask questions remotely is included at the end of this news release.

Origins of the Micro Robots

Over the course of the past several years, Miskin and research colleagues developed a multistep nanofabrication technique that turns a 4-inch specialized silicon wafer into a million microscopic robots in just weeks. Each 70 micron long (about the width of a very thin human hair), the robots’ bodies are formed from a superthin rectangular skeleton of glass topped with a thin layer of silicon into which the researchers etch its electronics control components and either two or four silicon solar cells — the rudimentary equivalent of a brain and organs.

“The really high-level explanation of how we make them is we’re taking technology developed by the semiconductor industry and using it to make tiny robots,” said Miskin.

Each of a robot’s four legs is formed from a bilayer of platinum and titanium (or alternately, graphene). The platinum is applied using atomic layer deposition. “It’s like painting with atoms,” said Miskin. The platinum-titanium layer is then cut into each robot’s four 100-atom-thick legs.

“The legs are super strong,” he said. “Each robot carries a body that’s 1,000 times thicker and weighs roughly 8,000 times more than each leg.”

The researchers shine a laser on one of a robot’s solar cells to power it. This causes the platinum in the leg to expand, while the titanium remains rigid in turn, causing the limb to bend. The robot’s gait is generated because each solar cell causes the alternate contraction or relaxing of the front or back legs.

The researchers first saw a robot’s leg move several days before Christmas 2017. “The leg just twitched a bit,” recalled Miskin. “But it was the first proof of concept — this is going to work!”

Teams at Cornell and Pennsylvania are now at work on smart versions of the robots with on-board sensors, clocks and controllers.

The current laser power source would limit the robot’s control to a fingernail-width into tissue. So Miskin is thinking about new energy sources, including ultrasound and magnetic fields, that would enable these robots to make incredible journeys in the human body for missions such as drug delivery or mapping the brain.

“We found out you can inject them using a syringe and they survive — they’re still intact and functional — which is pretty cool,” he said.

Materials provided by American Physical Society. Note: Content may be edited for style and length.