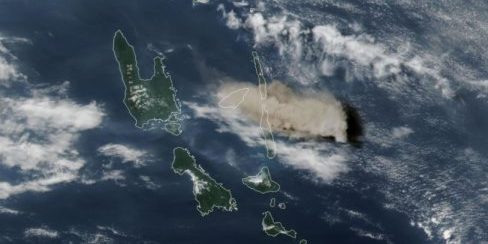 The Manaro Voui volcano on the island of Ambae in the nation of Vanuatu in the South Pacific Ocean made the 2018 record books. A NASA-NOAA satellite confirmed Manaro Voui had the largest eruption of sulfur dioxide that year.

The volcano injected 400,000 tons of sulfur dioxide into the upper troposphere and stratosphere during its most active phase in July, and a total of 600,000 tons in 2018. That’s three times the amount released from all combined worldwide eruptions in 2017.

During a series of eruptions at Ambae in 2018, volcanic ash also blackened the sky, buried crops and destroyed homes, and acid rain turned the rainwater, the island’s main source of drinking water, cloudy and “metallic, like sour lemon juice,” said New Zealand volcanologist Brad Scott. Over the course of the year, the island’s entire population of 11,000 was forced to evacuate.

At the Ambae volcano’s peak eruption in July, measurements showed the results of a powerful burst of energy that pushed gas and ash to the upper part of the troposphere and into the stratosphere, at an altitude of 10.5 miles. Sulfur dioxide is short-lived in the atmosphere, but once it penetrates into the stratosphere, where it combines with water vapor to convert to sulfuric acid aerosols, it can last much longer — for weeks, months or even years, depending on the altitude and latitude of injection, said Simon Carn, professor of volcanology at Michigan Tech.

In extreme cases, like the 1991 eruption of Mount Pinatubo in the Philippines, these tiny aerosol particles can scatter so much sunlight that they cool the Earth’s surface below.

The map above shows stratospheric sulfur dioxide concentrations on July 28, 2018, as detected by OMPS on the Suomi-NPP satellite. Ambae (also known as Aoba) was near the peak of its sulfur emissions at the time. For perspective, emissions from

Hawaii’s Kilauea and the Sierra Negra volcano in the Galapagos are shown on the same day. The plot below shows the July-August spike in emissions from Ambae.

“With the Kilauea and Galapagos eruptions, you had continuous emissions of sulfur dioxide over time, but the Ambae eruption was more explosive,” said Simon Carn, professor of volcanology at Michigan Tech. “You can see a giant pulse in late July, and then it disperses.”

The OMPS nadir mapper instruments on the Suomi-NPP and NOAA-20 satellites contain hyperspectral ultraviolet sensors, which map volcanic clouds and measure sulfur dioxide emissions by observing reflected sunlight. Sulfur dioxide (SO2) and other gases like ozone each have their own spectral absorption signature, their unique fingerprint. OMPS measures these signatures, which are then converted, using complicated algorithms, into the number of SO2 gas molecules in an atmospheric column.

“Once we know the SO2 amount, we put it on a map and monitor where that cloud moves,” said Nickolay Krotkov, a research scientist at NASA Goddard’s Atmospheric Chemistry and Dynamics Laboratory.

These maps, which are produced within three hours of the satellite’s overpass, are used at volcanic ash advisory centers to predict the movement of volcanic clouds and reroute aircraft, when needed.

Mount Pinatubo’s violent eruption injected about 15 million tons of sulfur dioxide into the stratosphere. The resulting sulfuric acid aerosols remained in the stratosphere for about two years, and cooled the Earth’s surface by a range of 1 to 2 degrees Fahrenheit.

This Ambae eruption was too small to cause any such cooling. “We think to have a measurable climate impact, the eruption needs to produce at least 5 to 10 million tons of SO2,” Carn said.

Still, scientists are trying to understand the collective impact of volcanoes like Ambae and others on the climate. Stratospheric aerosols and other volcanic gases emitted by volcanoes like Ambae can alter the delicate balance of the chemical composition of the stratosphere. And while none of the smaller eruptions have had measurable climate effects on their own, they may collectively impact the climate by sustaining the stratospheric aerosol layer.

“Without these eruptions, the stratospheric layer would be much, much smaller,” Krotkov said.